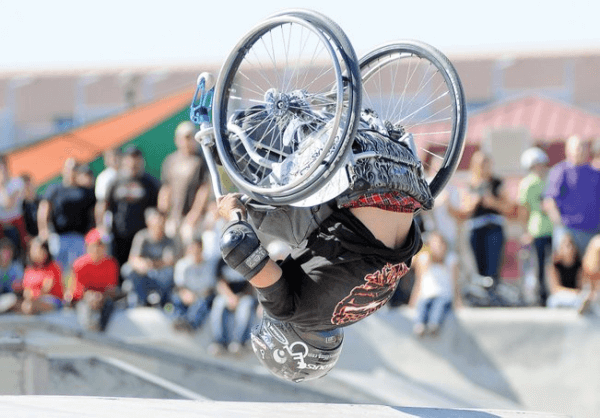 Men’s Liberty has been privileged to be a Mission: ABLE partner and supporter of the National Veterans Wheelchair Games which are taking place in Tampa in July 2013. We’ve learned SO much from these inspiring athletes. And every time I talk to the competitors they give me new reasons to believe in the resilience of the human spirit. They speak with passion and conviction about the impact that adaptive sports have had in their life. Whether you’re an old hat or still a bit green, we’ve heard your stories and wanted to share the top 5 ways you say that adaptive sports have changed your lives. Have additional ways – let us know in the comments!

The stories below are from a variety of individuals, including veterans and civilians with spinal cord, traumatic brain and other injuries.

#1 – “Today, I am only on three different medications (down from 15) because of skiing. I have had the same coaches for the last three years and they have seen fast and unbelievable changes in me with my TBI.”

Spc. Joel Hunt is an army veteran with a Traumatic Brain Injury who competes as an Alpine Skier.

“When I came home I spent one year in a wheelchair feeling helpless. I was always the man that provided for my soldiers. And now I had to swallow my pride and ask for help. When my parents came to take care of me they constantly motivated me by getting me out of the house. I was lucky because a lot of soldiers do not have that support system. I am from Kokomo, a small town in Indiana and I had never skied before in my life.

What I didn’t realize is that skiing would change my life. In February 2008, I started getting out of my wheelchair because of my dizziness and my blackouts due to overheating. Plus, I didn’t have enough control in my legs due to numbness and I was on 15 different kinds of medications. At times, my speech was slurred and my thinking was so slow that people thought I was drunk.

Since I had PTSD and TBI, I never wanted to get out of the house. My parents forced me to go to BOEC TBI ski camp to give it a try. On December 17, 2008, I learned how to ski and was told that I was carving on the third day. I was then introduced to NSCD to learn to race camp which I did well on rec skis. My best friend told me to check out CAF Operation Rebound and because of them and Disabled Sports USA’s (DS / USA) efforts, I was able to compete that next year.”

How adaptive sports changed your life:

“Today, I am only on three different medications (down from 15) because of skiing. I have had the same coaches for the last three years and they have seen fast and unbelievable changes in me with my TBI.”

#2 – “Playing sports, along with everyone’s support, played a key role in my physical recovery as well as my psychological recovery.”

Carlos Leon is a quadriplegic and former marine who competes in the Discus. He’s only 2.62m from breaking the world record!

Training Regimen: “I pretty much live at the gym because I want to be the best in the world at the discus throw.”

How did you get involved in adaptive sports: “My parents are Colombian so playing soccer at an early age is a tradition in my family. I’ve been an athlete my entire life. In June 2005, I had recently returned from deployment in Iraq and was six months from relief of active duty. While stationed in Hawaii’s Kane’ohe Bay, I went swimming with some friends. I dove in the water, hit some coral rock and broke my neck at the fifth cervical vertebrae. Five months later, I attended my first sports camp.”

How adaptive sports changed your life: “My family, friends and the Corps were behind me 100%. Playing sports, along with everyone’s support, played a key role in my physical recovery as well as my psychological recovery. Six years have passed since my accident where I lost function of my limbs. Now, I can walk with the assistance of a cane or walker. My discus throw, which is now my sole focus, has gone from eight meters on my first throw five years ago to nearly 24 meters. I am only 2.62 meters off the world record.”

#3 – “Growing up, I didn’t know any injured people. The only injured people we see are the people at traffic stops asking for change. Paralympic sports opened my mind to a different world. I learned that I had options.”

Kari Miller is an Army veteran and double amputee. She competes in women’s sitting volleyball and won a silver medal at the 2008 Paralympic Games in Beijing, China and named best libero at the 2009 Euro Cup.

How did you get involved in adaptive sports: “In December 1999, I was on leave of duty to visit my family for Christmas. While driving, my car was struck by a drunk driver and as a result, I lost both of my legs. In the weeks following the accident, I had plenty of bad days but my physical and emotional rehabilitation came through athletic competition.”

How adaptive sports changed your life: “Through sport competition, my work with the USOC Paralympic Military Program and support from my family, I realized my full potential as an athlete with a disability. Growing up, I didn’t know any injured people. The only injured people we see are the people at traffic stops asking for change. Paralympic sports opened my mind to a different world. I learned that I had options.”

Kari participates in sports for: Rehabilitation, competition and teaching other disabled Veterans about sports.

#4 – Going from instructor to student gave me a new appreciation of how “hard it is for our students to do what we ask them to do; and how dedicated and competent our instructors are.”

For many years, I taught skiing and snowboarding at the Adaptive Sports Foundation as a volunteer instructor. I skied or snowboarded everywhere on Windham Mountain with ease. I gave the first snowboard lesson to many of our students on the racing team.

Life changed for me a few years ago when I developed a neurological condition that cost me the use of my legs. In 2008, I could no longer snowboard or ski. In fact, I could barely walk.

So, I became an indoor volunteer, doing what I could to remain active in the program and stay in contact with friends, fellow volunteers, and students. My fellow instructors and students, especially Michael Mistretta, Kevin Cohane, John Swartwood and Mary Bozzone, gave me wonderful advice on how to cope with my new disability, which made life a lot easier. I learned how to use crutches and a wheelchair, which was something I never thought I would have to deal with on a personal level.

Last winter, I took the plunge and tried mono-skiing.

With assistance and encouragement from Adam DeMuth, my daughter Dani, and many other instructors, I was finally able to get back on the snow. The experience was exciting and enlightening! Being on the other side, a student and not instructor, brought home two things I never understood before: first, how hard it is for our students to do what we ask them to do; and second, how dedicated and competent our instructors are.

I wish I could say I was an instant superstar, but the fact is, I did a lot of falling, and Adam and Dani did a lot of picking up. I knew what I was supposed to do, but I wasn’t always able to do it. And, it is amazing how steep White Way, a Windham Mountain beginner trail, looks when you are going down in a mono-ski and not upright on a snowboard. After a few days and many runs, I was able to master Willpower, another Windham Mountain beginner trail, and get up and down White Way with ease.

My instructors displayed infinite patience, not only teaching me how to ski, but encouraging me after each frustrating fall. This year my goal is to improve enough so that I can return to teaching. If I can accomplish that, I know I will be better than I ever was before, because now I have seen life from the other side.

For more information on the Adaptive Sports Foundation, visit: http://blog.adaptivesportsfoundation.org/2011/03/volunteer-gains-first-hand-insight-as-role-changes-from-instructor-to-participant/

#5 –  “When you’ve had a traumatic injury it affects your social life, self-confidence and self-worth. Our job is to say ‘your life has changed but it hasn’t gone up in smoke’.”

Tom Brown, who was a rehabilitation therapist at McGuire VA hospital and director of the first National Veterans Wheelchair Games, knows firsthand the therapeutic value of adaptive sports. Born without legs— “I have been basically between artificial legs and wheelchairs all my life”—at age 7 he was the youngest member of an all-men’s wheelchair basketball team.

While majoring in music at the University of Illinois, Brown enthusiastically participated in UI’s wheelchair sports program—one of the few in the country at the time. In the end, love of sports prevailed; he pursued his master’s in therapeutic rehabilitation (TR).

“The goal of TR is to get people with disabilities out into the community,” Brown, Paralyzed Veterans’ director for the 32nd Games, explains.

“When you’ve had a traumatic injury it affects your social life, self-confidence and self-worth. So we work on whole body, mind and soul. All of these [injured] were military vets, parts of teams—now suddenly they are on their own, they can’t be part of something. Our job is to say ‘your life has changed but it hasn’t gone up in smoke.’ ”

Dr Ken Lee, head of spinal cord medicine at VA Medical Center in Milwaukee, and himself a combat veteran and former patient (he received a traumatic brain injury from a suicide car bombing) seconds Brown’s view. “We’ve been pushed to do some sports since childhood,” he says. “It makes sense that when we have an injury or life-altering medical event, we can use sports to get back into the world—the wheelchair is no longer a boundary.”

A member of the Games’ national physician team since 1999, Dr. Lee sees it as an event that epitomizes adaptive sports’ unique healing abilities. “Many people think adaptive sports are fun and games,” he says. “They don’t realize it is all about rehab. Adaptive sports keep the rehab in motion—and keeps the injured moving forward.”

Both Lee and Brown see an added value in the sheer numbers competing. “The modeling between a new vet and a worldly vet, who has been to the Games and been out in the community is remarkable,” Brown says. “It’s worth probably more than any therapist or hospital program could ever do. It’s one thing for an able-bodied person to tell them ‘you can do it’—when they see fellow vets doing it, it sinks in.”

For more information on the Paralyzed Veterans of America and the Wheelchair Games, visit: www.pva.org

Have additional stories you want to share?  Let us know in the comments!